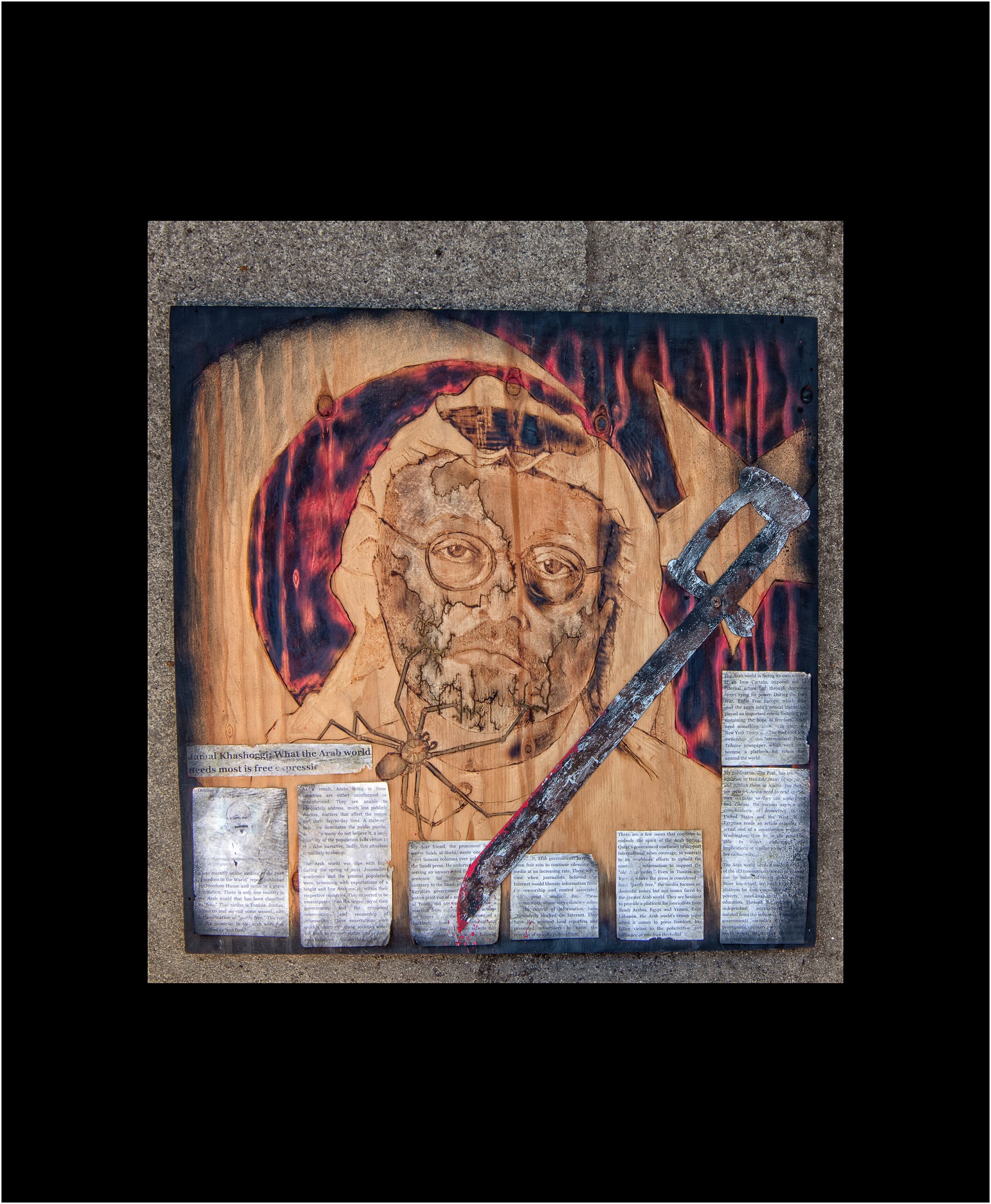 I don’t want to remember Jamal Khashoggi this way, a giant brown recluse electricuting his innocent face, a Saudi Arabian sword at his neck, but it was all I saw for months after his murder. It symbolized everything the Trump administration stood for – corruption at the highest level for financial gain, retaliation, and satisfaction of ego. It demonstrated that allies of the United States know they can get away with murder because Trump’s international leadership has no moral backbone. His murder was ordered and carried out because accountability at the highest levels of office is nonexistent. Leaders can go rogue with impunity and they know it.

Our government responded to his murder by agreeing to stay in a financial relationship with Saudi Arabia, whose leader ordered the murder. Turkey, where the murder took place, criticizes our silence, but they are known for the systematic use torture and imprisonment of people who speak against the government. Their hands are dirty too. This portrait holds all three countries responsible. The red stripes reference the flag of the United States, as does the star, positioned in relationship to the moon from the Turkish flag. The sword comes from the Saudi Arabian flag. As for the brown recluse – the most deadly and feared spider in all three countries. Along the bottom is Khashoggi’s last editorial, printed post-mortum. His editor Karen Attiah notes, “his column perfectly captures his commitment and passion for freedom in the Arab world. A freedom he apparently gave his life for.”

In a private email, Khashoggi called the Crown Prince of Saudi Arabia a beast. He couldn’t have been more right – but Khashoggi underestimated the reach of the Crown Prince. Hiring an entire hit team including a body double who walked out of the Saudi consulate pretending to be Khashoggi, the Crown Prince is responsible for silencing one of his most vocal critics – via death by dismemberment, with a bone saw, chemicals to coagulate his blood to reduce the mess, and loud music to make the process more bearable for the witnesses. His body has yet to be recovered – one theory is that it was burned in an underground oven while the Prince held a massage bbq on the property to disguise the smell.

Buried deep in the etymology of the words beast and corruption, I bet there is some overlap.

For sure only a beast could do this, but it’s corruption that killed Khashoggi, corruption approved of by the leaders of my own country, among others.

Beasts. All of them.